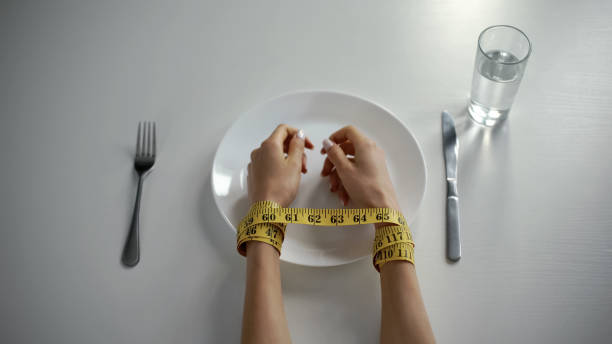 Eating disorders are serious conditions that involve sufferers becoming overly focused on their weight, body shape and food.  This leads to dangerous eating behaviours that can have serious detrimental effects on the body, mind and ability to function in other areas of life such as work and relationships.  Whilst eating disorders often have extreme physical symptoms, they are classed as mental health conditions. Eating disorders are not just about food, but are often a way of coping with stress or difficult emotions.  They can help sufferers to feel in control of one area of their life, often at times when other areas may feel out of their control. This blog is the first of two on eating disorders and aims to cover some key signs and symptoms. In parts this is also related to my personal experience with anorexia and orthorexia, which I suffered from at varying levels of severity for around 10 years.

The most common eating disorders are detailed below:

Anorexia nervosa is a potentially life -threatening eating disorder characterised by an abnormally low body weight. Sufferers excessively limit calories and may use other methods to lose weight such as exercise or laxatives. Anorexia involves an intense fear of gaining weight and a distorted perception of weight or shape.

Bulimia nervosa is characterised by episodes of bingeing and purging that involve feeling a lack of control around eating. Many people with bulimia may try to restrict their food at mealtimes or during the day, which later leads to bingeing and purging. Sufferers tend to eat a large amount of food in a short time and then try to rid themselves of the extra calories in an unhealthy way such as vomiting, excessive exercise or use of laxatives. It’s important to note that sufferers of bulimia can be of a normal weight or even overweight, and that someone doesn’t have to be of a very low weight to have an eating disorder. This mistaken belief can prevent some people who feel they have an issue from seeking support as they believe they won’t be taken seriously and/or ‘don’t look ill enough’ to have an eating disorder.

Binge eating disorder involves a sufferer consuming a large amount of food and feeling a lack of control over their eating. They may eat more quickly or more food than intended even when not hungry and may continue to eat long after they are comfortably full. Binges, like many behaviours surrounding eating disorders, may lead to the sufferer feeling guilt, shame, disgust and other difficult emotions. Again, sufferers can be a normal weight or overweight.

Symptoms of eating disorders can vary between individuals, although there are some commonly agreed signs that may indicate such problems. These signs can be physical, behavioural and emotional, which demonstrates the huge impact eating disorders have on individuals and all areas of their lives.

Symptoms to look out for if you’re concerned about yourself or somebody else may include:

Behavioural: Skipping meals or making excuses for not eating, eating in secret, an excessive focus on healthy eating, persistently making their own meals rather than eating out or what family/others are eating.

Eating disorders can cause such extreme changes in behaviour that it can feel to loved ones as if the person has been replaced by a stranger. It can also be terrifying and upsetting for the sufferers who may not even recognise themselves anymore and may feel that they no longer have the same place in their family, friendships and other relationships. Eating disorders can be so scary and confusing that sufferers may often be left contemplating whether others would be better off without them as they can often feel like a burden. Eating disorders can therefore link with self-harm and suicidal thoughts.

As with many mental illnesses, the exact causes of eating disorders are unknown and there are many possible causes and contributory factors. I remember studying psychology at college and listening to some extreme theories as to how and why they develop and thinking none of them applied to me at all. For me the theories around trauma, abuse and dysfunctional relationships held no weight. Genetics and biology may also play a part and certain people may have genes that increase their risk of developing eating disorders. If somebody else in the family has had an eating disorder such as a parent or sibling it can leave others at higher risk. As none of these were the case for me, I questioned for a very long time what possible reason I had for developing anorexia.

Of course, it isn’t always necessary to know the cause or reason for an illness in order to begin treatment and recovery. However, as I went along my journey of recovery I learned that I was actually the stereotypical example of someone diagnosed with an eating disorder. I was diagnosed as a teenager (14 years old), a female and a high achiever with extreme perfectionist tendencies. These are all key factors putting individuals at higher risk of eating disorders. Having experience of other mental illnesses such as depression and anxiety may also increase the risk of somebody developing an eating disorder which is further evidence that psychological factors and personality traits may be strongly involved.

I was always an academic child and I firmly believe that my eating disorder began when I was predicted 10 A *s in my GCSE’s. In line with several of the above suggestions, focusing on my weight and eating became something I could control at a time when I was very anxious about other things (my GCSE results) that felt very uncertain. Adolescence is of course a natural time to become focused on body image and as someone who had never been naturally ‘sporty’, I decided that focusing on my health and fitness a little more would be a great way of ensuring I was good at everything. Of course I now know this isn’t possible and nobody should feel pressure to be perfect, but my all-or -nothing/perfectionist personality type took fitness and dieting to the extreme.

Starting a diet or new fitness regime has also been identified as a possible trigger for eating disorders for this reason. It is also noted that not just traumatic or life changing events can cause or trigger eating disorders, but any stressful events or situations can. For me, that ‘stressful situation’ was simply the huge weight of expectation I felt at being expected to achieve the highest grades possible in all of my GCSE’s. Further backing up this theory, in the summer after I received my GCSE results I very quickly recovered and returned to a normal weight. I later relapsed at university when I realised I was unhappy in the course, location and relationship I was in but was terrified and ashamed at the thought of ‘letting people down’ or being seen as a ‘quitter’. Once again I attempted to gain some control over my life and emotions by focusing on my weight and diet. Looking back, it’s heart-breaking that my younger self would rather starve herself than be honest with her very supportive family and friends in order to avoid feeling like a failure. This is a large part of the reason why I’m so passionate about people being their own best friend wherever possible and being taught the importance of finding what truly makes them happy and works for their life as opposed to what society dictates or expects.

Whenever I talk about my eating disorder and what triggered it, I feel that it’s of crucial importance to point out that I was never put under any pressure by my family or even teachers to achieve so highly. In fact, my family and my teachers where the biggest support system I could ever have hoped for and to this day I still believe that without some of them I would never have recovered. One of my teachers even made my year 11 prom dress by hand as shops didn’t sell anything small enough to fit me. I feel very strongly about the academic pressures put on young people by the system/government/society in general, however nowadays I believe young people are under more pressure than ever through the rise of things like social media. Statistics undeniably show that eating disorders continue to rise and in the next blog I share some of the key factors that eventually allowed me to make a complete recovery.

Thank you for reading this blog in particular as the subject is so close to my heart. Please don’t hesitate to contact Mike at Hamers360fitness or myself on Instagram with any questions.